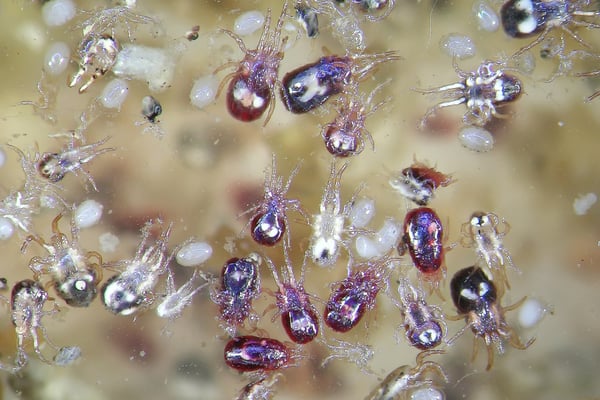 These mites get the “northern” part of their common name because they live in temperate or northern regions. The “fowl” part of their name references the fact that they’re common parasites of domestic fowls.

Northern fowl mites become a nuisance pest when they migrate from bird nests near buildings. These mites may attack humans or crawl around in indoor living spaces. They’re found throughout the temperate regions of the world, including the US.

These mites typically become a problem in structures around when bird nestlings leave the nest. Mites most commonly attach to birds such as pigeons, sparrows, starlings, robins, meadowlarks, grackles, and chickens. When these birds abandon their nests, they often leave behind the mites that relied on them for food. These hungry mite nymphs and adults have to migrate from abandoned bird’s nests to find different food sources nearby.

Mites move inside structures by crawling down from nests and entering structures through window frames or other openings. Sometimes, mites also infest nests that are already inside the structures they move into. In those cases, they usually come through the attic and enter other parts of the building via ceilings and walls. If mite populations become very large, some mites may migrate before nestlings leave. Unusually, adult mites tend to mostly remain on their hosts. If enough infest a single bird, they may be visible as grayish to blackish spots on that bird. Like other stages of the life cycle, however, adult mites may also infest nest debris and crevices.

Use a vacuum cleaner fitted with hose and crevice attachments to remove mites from indoor surfaces. Use a light touch to avoid crushing the mites and creating a staining problem. If you can find the openings mites use to get inside, seal them off with silicone sealant or caulk.

Wash and dry all the bedding, clothing, and other fabric in any infested rooms. If mites attach themselves to you, ask your doctor about prescription ectoparasitic mite-removing lotions. Over-the-counter mite removal lotions may also be available at drug stores.

Northern fowl mites are very small, measuring 1/64 to 1/32” long. Before feeding, the mites appear nearly white. Immediately after eating a blood meal, they turn a translucent bright red. Finally, they turn gray or black as they digest their blood meals.

If you have a mite infestation in your building, it probably came from a nearby bird nest. The infested nest may be in your attic, eaves, windowsills, rooftop, chimney, or vent system. The first thing Plunkett’s will do to treat your mite problem is find and remove this nest. After we remove the nest, we’ll also treat the area around where the nest was.

After removing the nest, our professionals locate and treat the openings where mites entered or hide in your home. By addressing the root problem and current infestation all at once, Plunkett’s provides reliable and complete mite control. If you think you have a Northern fowl mite problem, give us a call right away. We’ll figure out where it is and wipe it out for good.