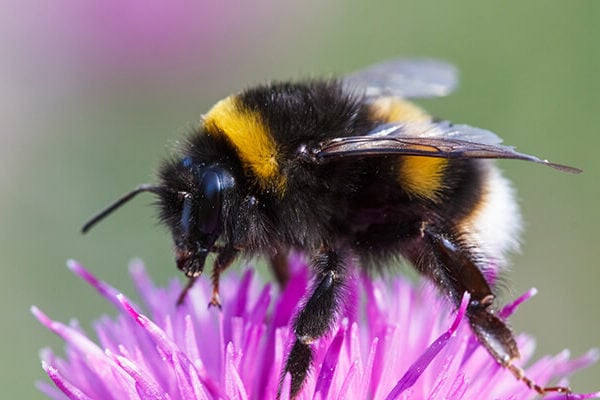 The common name of bumble bee comes from their large, clumsy demeanor (they “bumble”) and loud buzzing sound they make as they fly. In the urban setting, bumble bees occasionally nest in structures and beneath landscape features. Because of their abundance around flowering plants, they can be a concern because they’re a stinging insect. There are about 45 individual species in the United States and Canada, and about a dozen species in Ohio.

Bumble bees are social insects which live in nests and colonies. The adults are represented by sterile female workers, queens, and males (drones) which come from unfertilized eggs and usually appear in late summer. Typically, only inseminated queens overwinter and do so underground.

In late summer, a mature bumble bee nest ultimately contains about 50-400 bees and brood (larvae and pupae) at any given time. In the late summer only males (drones) and new queens are reared in the nest. Once these new queens emerge, they mate and find a suitable place to overwinter. The males, workers, old queen, and any virgin new queens die with the onset of cold weather.

Overwintered queen bumble bees will select an appropriate nesting site the following spring. Some queens locate a small, dark cavity containing fine plant fiber, in which to nest. The abandoned underground nests and burrows of mice, voles, and chipmunks are favorable sites. Other queens select a dense clump of grass on the surface or sheltered pile of grass clippings for a nest.

Bumble bees may defend their nests using their stingers, which they can use to sting repeatedly. Some species will also spray feces, and some cover the intruder with regurgitated honey. People sensitive to insect venom should exercise care around bumble bee nests. The sting of bumble bees is sharply painful and usually results in considerable swelling.

During the day, find the location of each nest by observing where the bees disappear into the ground, grass clump, or structure. The location of the entry hole can be marked with a small, brightly colored object placed near it to facilitate discovery by the pest management professional who comes to treat the colony. Under no circumstances should the entrance hole to a structural nest be closed off until the colony has been destroyed.

The adult worker body length is 1/2 to 1 inch, while queens measure 3/4 to 1 inch or more long. Bumble bees are robust in form with an overall fuzzy appearance, including the top surface of abdomen. They’re similar in appearance to carpenter bees with the main difference being that their bodies are completely covered in hair. They are broadly banded with black and yellow – sometimes orange – patterns. The stinger is usually not left behind when used. (The honey bee leaves behind its stinger when used.)

Bumble Bees are considered beneficial insects because they pollinate the flowers of many plant species. Typically they nest away from people and structures. Nest treatments should be a final resort. However, if their nest is located in or close to an occupied structure or recreational area, then control is warranted.

When you contact a Plunkett’s Pest Control technician, they’ll come to your home or business and will liberally inject a residual insecticide dust into the nest entrance. For structural nests, the cavity will be treated with a dust or aerosol formulation but the entrance will not be sealed until the colony has been destroyed. Treated structural nests will be removed, if accessible, to prevent future problems with secondary pests, such as dermestid beetles, wax moths and psocids.