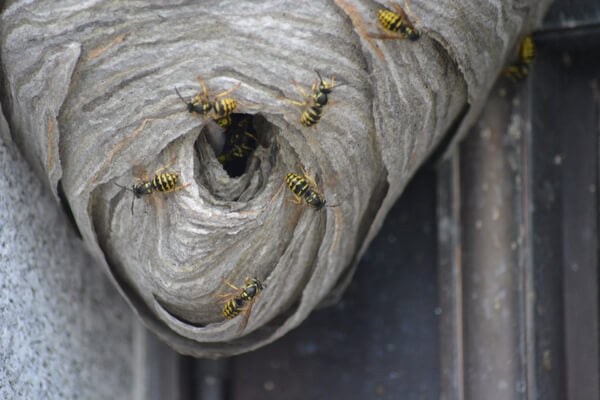 Yellow jackets receive their name from their black and yellow color pattern. They are a stinging insect that is distributed worldwide with about 16 species occurring in the United States and about 8 species in Ohio.

The worker abdominal color pattern is usually distinctive for each of the five most commonly found species:

The German yellow jacket occurs throughout most of the United States except in the far south. The nests are constructed in attics, above eaves, in soffits, false ceilings, and in deep box sills of bay windows and cantilever construction.The eastern yellow jacket is common east of the Great Plains. The soccer ball-size nests are constructed in the ground and wall voids of buildings.The common yellow jacket is found throughout most of the United States but is less frequently found than the German and eastern yellowjackets.The aerial-nesting yellow jacket builds an exposed paper nest (similar to that of the baldfaced hornet) in shrubs, trees and on sheltered structural surfaces.

Yellow jackets are social insects and live in colonies. The adults are represented by workers which are sterile females, queens (fertile females), and males which come from unfertilized eggs and usually appear in late summer. Typically, only inseminated queens overwinter and do so in sheltered places.

Most of the pest species are ground nesting. However, the German, Eastern and common yellow jackets occasionally nest in buildings. Those nesting in the ground typically select areas bare of vegetation or else clear an area around the entrance. There are nest entrance guards to protect the colony. Yellowjackets are very slow to sting unless the nest entrance is approached and then they are quite aggressive. Each can sting a number of times, inflicting much pain.

People and pets should be kept away from yellow jacket nest entry points. Entry holes should not be closed off until the colony has been destroyed and no further activity is noticed. Only gaps through which yellow jackets gain entry to indoor living spaces should be sealed as immediately as they are discovered. If yellow jackets chew through a wall or ceiling from the nesting cavity and become a health threat to the occupants, that room or area of the residence should be evacuated and isolated pending the arrival of a Plunkett’s technician, who will remedy the situation.

Adult workers measure 3/8 to 3/4 inch long, depending on the species, with their respective queens about 25% longer. The abdomens are usually banded with yellow and black and some species with white and black. This coloring makes so that they can be mistaken for honey bees, but the wasps telltale body shape and smooth abdomen are the easiest way to tell them apart.

Yellow jackets are considered beneficial insects because their food consists mostly of pest insects and spiders. However, if their nest is located close to occupied buildings, recreational areas, or within structures, then control is necessary. During the day, a careful inspection by a Plunkett’s technician will reveal where the nest entrance is for each colony to be controlled. If it is a ground nest, then the entrance hole will be treated with an appropriately labeled pesticide dust. If the nest is located in a wall void, then the void will be treated via the entrance hole or a temporary injection port. Ideally the wall void nest area should be opened up and cleaned out to prevent future secondary pest problems and decay odor and stains.