BlogAre the Spiders in My House Dangerous? 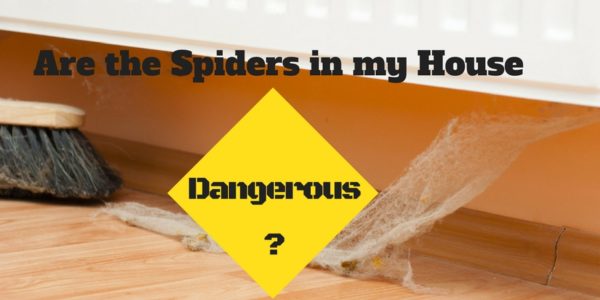 If you’re reading this, there’s a good chance you’re hunched up on your seat like a gargoyle so your feet don’t touch the floor. Relax. You’re safe now, we’re here to help. So, you just saw a big old spider in your house. You were probably down in your basement retrieving something, moved a box, and there it was. Staring at you. With those eyes. A lot of homeowners get really stressed out by even the thought of spiders in their house. If it’s an overreaction, it’s an understandable one. Still, a lot of spider fear comes from a common misconception that they’re aggressive or dangerous. That’s why Plunkett’s is going to answer all the panicked questions that probably pop into your mind the second you see a huge daddy long legs scamper across the floor. We hope this helps (at least a little). 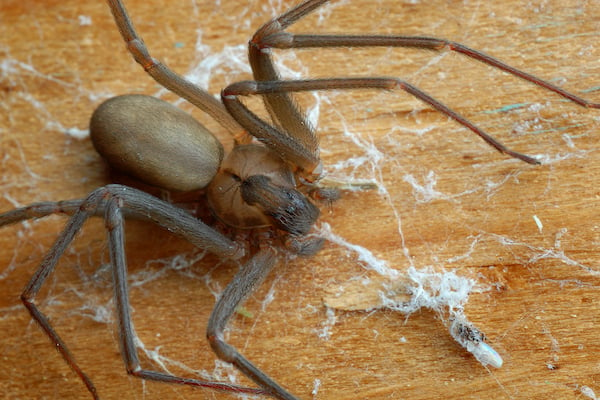 Are These Spiders Dangerous?

Almost certainly not. More than 3000 species of spider have been identified in the United States. Of these, only about 60 have been responsible for dangerous bites. According to the University of Minnesota, over 80% of suspected “spider bites” were actually caused by other types of arthropods. Spiders are afraid of humans and only bite in self-defense. Even in the extreme off-chance a spider does bite you, chances are the spider won’t inject venom. Spiders with venom use it for hunting, not self-defense. Rarely, sac, wolf, jumping, and cobweb-weaving spiders commonly found in homes bite people. These bites are not dangerous. In fact, there are only two dangerous venomous spider types found in the United States: the Black Widow and Brown Recluse. 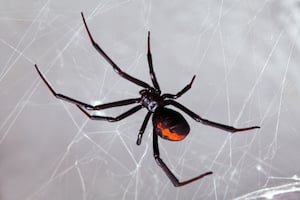 The “Northern” Black Widow (pictured above) has been found in the Midwest, but only very rarely. When Northern Widows are encountered, they are usually outside. 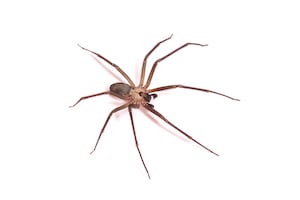 The Brown Recluse (pictured above) inhabits a wide swath of the Midwestern and South-Central US, and can be found in Missouri, the lower third of Iowa, the lower half of Illinois, southern Indiana, southern Nebraska, and parts of Kansas. True to their name, the Brown Recluse is reclusive. Brown Recluse bites are uncommon, and venom injections more uncommon still. However, Brown Recluse poison can be dangerous, so if you suspect you have a Brown Recluse living in your home, call us right away. 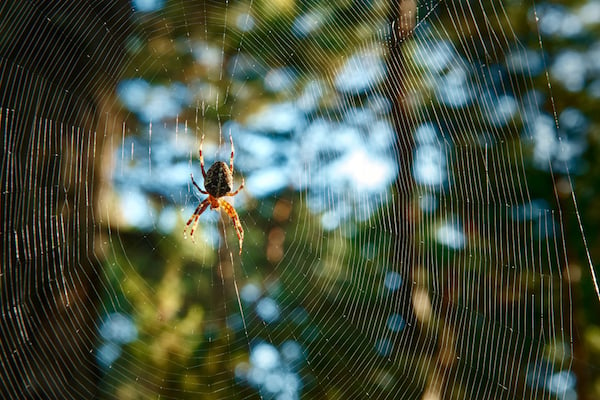 Where Did They Come From?

Different types of spiders inhabit virtually every environment. The Midwest is a great place for spiders because of our prevalent lakes, expansive conifer and evergreen forests, swamps, and open fields. The crawling, fast-moving spiders that freak you out the most are probably hunting spiders. Hunting spiders actually prefer the outdoors but occasionally chase prey or wander indoors. Hunting spiders usually live in woodlands, swamps, ponds, grassy fields, and stony beaches. If you see spiders crawling up walls or ceilings erratically, they’re probably hunting spiders. They aren’t dangerous to you, although they might freak you out. Web-building spiders are more common in houses, though ironically you may be less likely to spot them. Spiders that build webs to catch prey, such as cobweb and orb weaver spiders, generally make their webs in dark, secluded places well out of the way of foot traffic. They probably hide out in your cellar, basement, attic, or crawlspace. You probably notice these spiders in your cabin, especially if it’s near a lake. They’ll be brown or greyish, small, and moving slowly or stationary on their web. Some orb weaving spiders build webs in gardens, and the web-building funnel weaver spider commonly makes horizontal webs in lawns. 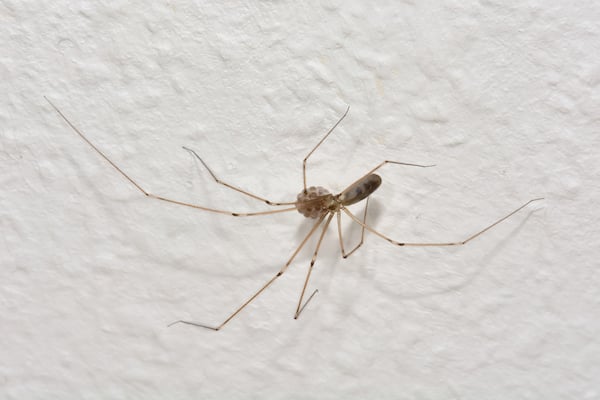 Why Are They Here?

Spiders take up residence in homes for the same reasons we do: to stay warm and to have a safe place to sleep. No Midwestern spiders can naturally survive the cold of our winters (what can?). When the cooler months come along, spiders start looking for places where they can hunker down for the winter and spin more permanent webs. They want a place that’s warm, moist, dark, cramped, and has access to food. If your house meets any of those criteria, spiders will try to get in like their lives depend on it. If you have a particularly bad spider problem, look for mold, standing water, rotting food, or anything else that attracts bugs. Fleas, flies, and the other little pests like them are the perfect prey for nest-building house spiders. The more food they can catch, the more likely it is that spiders will stick around or even build nests and have children. Spiders are also more likely to accumulate if they can build large webs that go undisturbed for long periods of time. 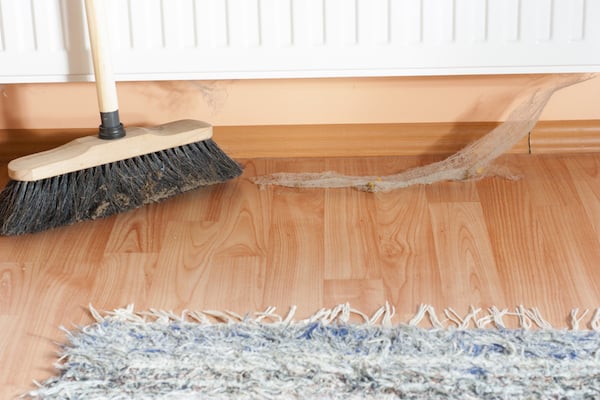 How Can I Keep Them Out?

It’s tough to keep spiders out completely, especially depending on where you live. You can, however, dissuade spiders effectively by depriving them of the things they want. Vacuum and sweep regularly, especially in the basement and attic. Pay special attention to corners and window sills, and don’t neglect the ceiling. Throw garbage out immediately, and keep your cans at least 10 feet away from your house. Seal cracks in your foundation, floorboards, and walls. You could also invest in a dehumidifier. If a part of your house continues to have a bad spider problem, something might be attracting a lot of bugs, such as a dead mouse or bird. Once you’ve completed your indoor anti-spider patrol, do some landscaping. Trim down hedges, bushes, and branches that are leaning against your siding. Keep firewood at least 10 feet away from the house. Repair any damaged or rotting siding or decking. Dispose of dead plants and flowers efficiently, and rake and dispose of dead leaves in the fall. Try to make sure no foliage is actually touching your home. 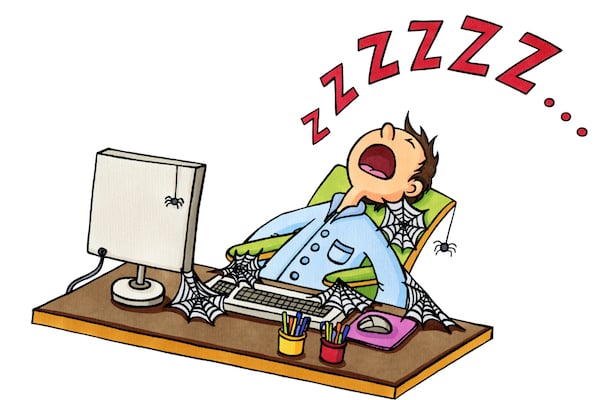 Do I Really Swallow Spiders While I Sleep?

No. The truth is, spiders are just another mundane house pest, despite their fearsome appearance and reputation. If you see a spider in your house, even a really big nasty-looking one, the overwhelming odds are, it’s harmless. Don’t go out of your way to provoke a spider, and they’ll leave you alone. If you have spiders you can’t seem to shake, give us a call. We’ve dealt with all kinds of spiders before, and we’re more than ready for them.
Categories:
spidersresidential pests
Previous 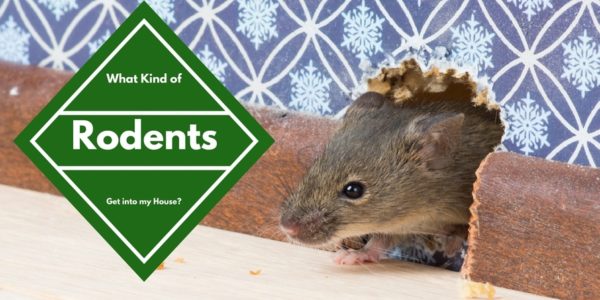 What Kinds of Rats and Mice Get Into Your House?
Next 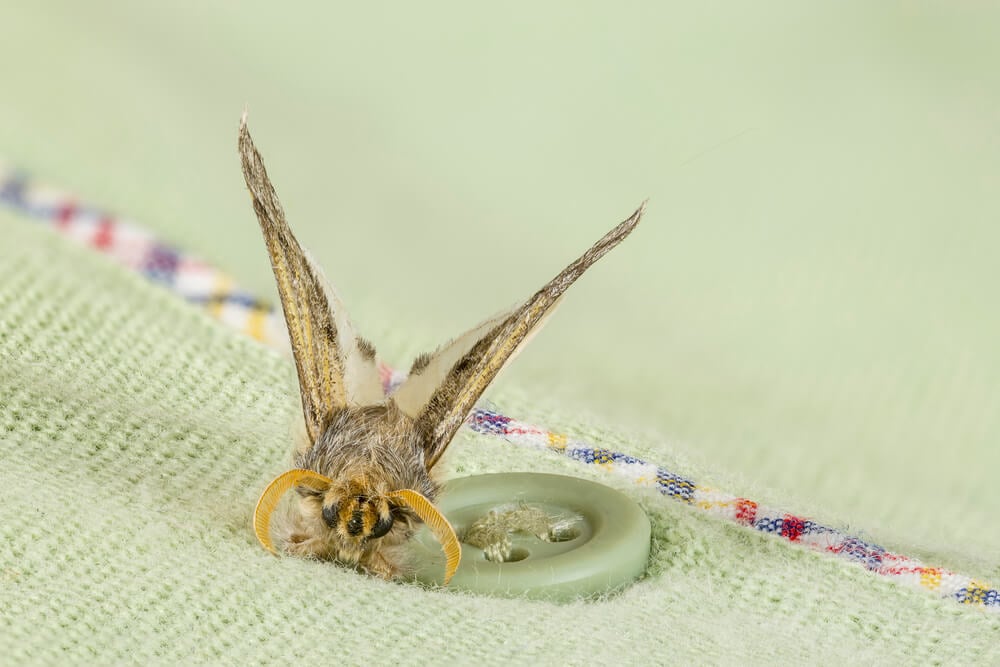 Why Do Moths Eat Clothing? And Other Moth Questions, Answered