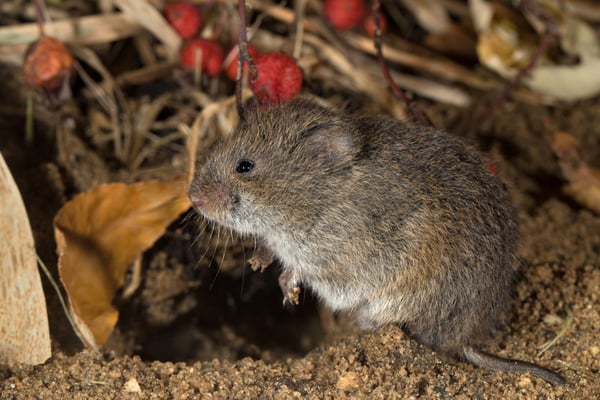 Meadow voles (Micotus pennsylvanicus) are also known as meadow mice, orchard mice, and field mice. They’re one of the most widely-distributed vole species in North America, and they’re particularly common in the northern US. Meadow voles are pest rodents that usually require dense grass or vegetation cover.

Unlike most pest rodents, meadow voles aren’t interested in getting inside buildings for food. Instead, they feed on vegetation like grass, which they can find outside. When meadow voles enter structures, it's either for shelter and warmth, or (surprisingly frequently) simply by accident. Once inside, however, meadow voles act similarly to other rodents–making them pests all the same.

Like most other rodents, meadow voles are highly cautious by nature. They spend the majority of most days hunkered down in dark hiding places. At night, the voles emerge from their hiding place to forage for food. They feed on grass, weeds, shoots, tender twigs, live bark, and other plant material. Around homes, they chew lawns, dig burrows in gardens, gnaw on trees, and feed on ornamental plants. These voles have to eat their entire body weight each day to survive, so they have to forage constantly. Meadow voles generally have a small, fixed foraging range of less than an acre.

Meadow voles only enter building areas at the ground level. They frequently inhabit stables and barns, usually after entering accidentally as hitchhikers on bales of hay. Meadow voles may also move from farm or uncultivated land into adjacent home lawns, gardens, and landscaped areas. Inside, voles make small nests out of piles of mixed grasses, usually in covered, dark, and secluded places. Meadow voles generally remain on the ground level as long as they inhabit a building. They commonly hide among boxes or clutter in basements and crawl spaces.

Voles resemble mice, except they tend to have shorter tails and heavier bodies. Adult meadow voles typically measure between 3 to 5” in length and weigh only a few ounces.

Meadow vole fur is long and soft, and looks brown with a textured mix of red, yellow, grey, or black. They have lighter, white or silver underbellies. Their tails are very skinny and about as long as their hind legs. Compared to mice or rats, meadow voles tend to look smaller, rounder, and lighter in color.

Meadow voles are capable of reproducing very rapidly. Female meadow voles become reproductively mature at only 20 days old. After reaching maturity, voles can reproduce continuously. Gestation of offspring takes less than a month, and weaning a litter of between 1 to 11 babies takes only 21 days. Meadow voles can continuously reproduce all year long, though they’re more prolific in mild weather.

Under the right conditions, a single meadow vole can produce 12 litters of offspring a year. If each litter averages 5 offspring, that’s 60 new meadow voles a year! Those voles will reach reproductive maturity in only 20 days and start having their own litters. You can see how vole infestations quickly grow out of control. Most meadow voles only live for about a year or a year and a half, indoors or outside. 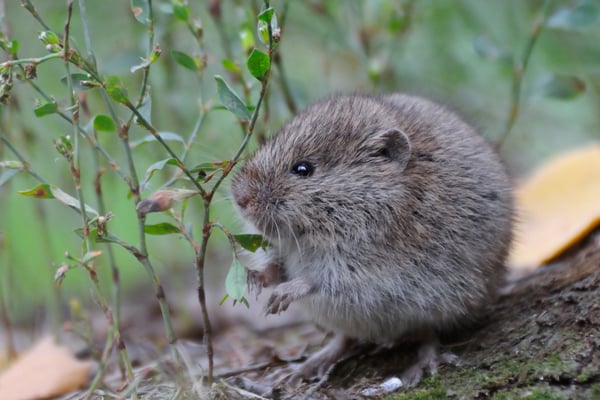 The two best ways to maintain meadow vole control are through exclusion and live trapping.

Excluding meadow voles from buildings works about the same way as excluding house mice. Put up a fine-mesh wire fence that’s at least 12" high around your vegetable gardens and tree trunks. Make sure you bury the bottom of the fence 6 to 12" deep to prevent voles from digging beneath it.

Bury the same fencing around your foundation, bushes, and especially the bottom of your porch. Periodically check on your fencing to make sure voles haven’t chewed or pushed through it. As always, you should also replace worn weatherstripping and patch gaps around door and window frames.

Sherman-type live-catch box traps (10″ x 3″ x 3″ or similar) work quite well when placed next to walls. The vole′s relatively large size makes some multiple-catch traps designed for smaller house mice ineffective. If live-trapping is the goal, make sure you check your traps every day. If you do successfully live-trap a vole, don’t release it near residential areas. If you do, it could simply find its way back inside! 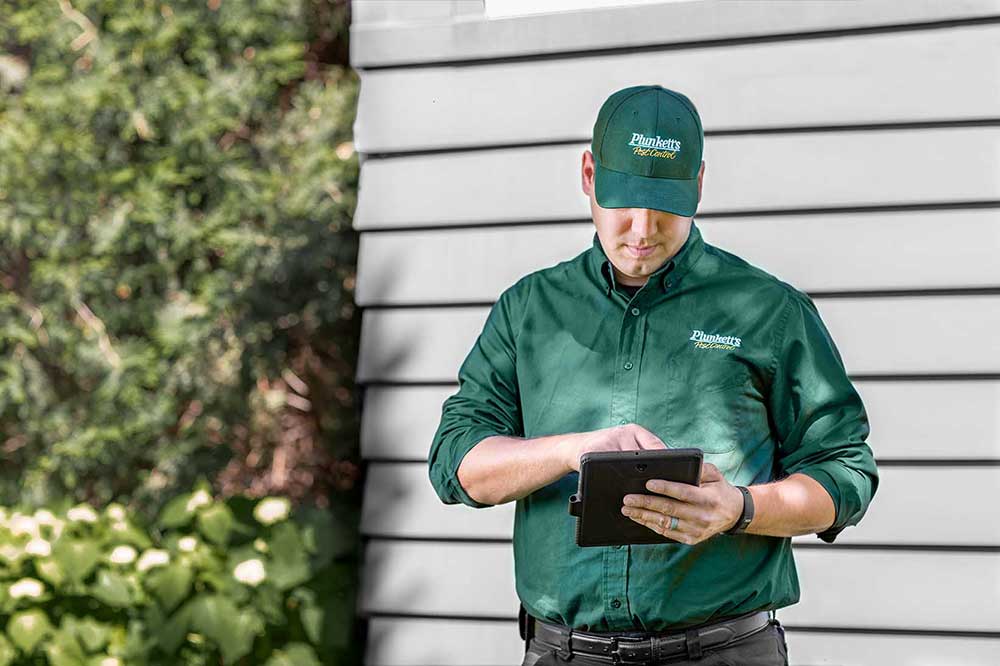