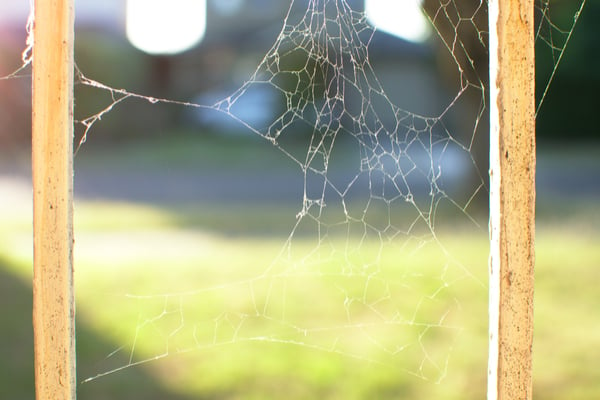 Spiders are arthropods that belong to the class Arachnida and order Araneae. They have two body regions: the cephalothorax (head fused with thorax) and abdomen (saclike and unsegmented). Spiders have 8 legs, jaws (chelicerae), a pair of feeler-like pedipalps, and either 8 eyes or 6.

There are over 3,400 species of spider in North America. We’ve divided the spiders you’re most likely to encounter on landscaping into four broad categories. Here’s what you need to know about each:‌

Garden spiders and other orb weavers typically measure ⅕ to 1 inch long and have a leg span of ½ inch to 2½ inches. Of the 3,500 species of garden spiders, about 180 species are found in the US and Canada. Most species are yellowish-brown or pale gray with darker brown and whitish markings. Some species may have yellow, orange, pink or red abdomens with white and/or black markings instead.

Woodlouse hunter spiders typically measure ½ inch long. The males and females are similar in size and coloration. They have 6 eyes, all of which are small and closely grouped. Their cephalothorax and legs are glossy red, and their abdomens are dirty white or beige colored.

Woodlouse hunter spiders may live indoors, on floors, along foundation walls, at ground level, or in garages. Usually, people find woodlouses under stones, logs, landscaping timbers, and other materials that contact with the ground. They also commonly sneak into the deep crevices formed between soil and mulch and building foundations. Woodlouse spider biters are about as painful and dangerous as bee stings.‎‌

Jumping spiders are about ⅛ to ¾” long. They are robust and compact with relatively short, stocky legs. The front pair of a jumping spider’s legs are often thicker and somewhat longer than their other legs. Both the body and legs have a velvety or hairy appearance. Different species of jumping spiders come in a wide variety of different colors. Some are black, brown, or grey with spots, patches, patterns, or stripes of other colors. Some jumping spiders have distinctively iridescent jaws and “faces.”

Wolf spiders range widely in adult body length from ¼ to 1 ⅜” long. Their legs are usually longer, measuring around 1 to 3” long. Both the body and legs of wolf spiders tend to be velvety or hairy. They may be yellowish-brown with darker brown and white markings, gray and brown, or nearly solid dark brown. The top middle pair of all wolf spiders’ eight pairs of eyes are much larger than their other 6.

Wolf spiders have fair vision and hunt actively. They’re mostly nocturnal and rest under logs, leaf litter, burrows, or crevices during the day. Females are slightly larger than males. Female wolf spiders are highly maternal, and carry newly hatched spiderlings on their bodies until the young can fend for themselves. Wolf spiders usually live in the basements and garages of homes and buildings. They’re particularly common in wooded areas. Wolf spiders don’t bite very often, but their jaws are large enough that their bites may be painful. Fortunately, Wolf spider venom is mild and presents no serious threat to humans.

If we discover a large spider population or particularly conducive conditions for spiders on your property, then we may recommend HomeGuard program for comprehensive year-round protection.

You can notably reduce the number of spiders around your landscape in a number of ways: