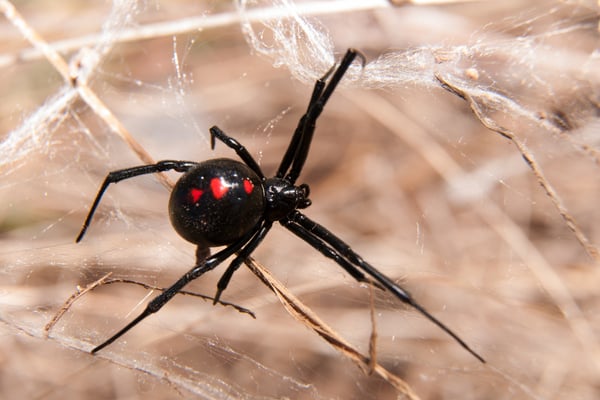 Spiders are grouped into families based on eye number (6 or 8), eye size, and the pattern on their backs. It’s also possible to tell them apart based on the arrangement of their silk-producing spinnerets and claws.

North America is home to 5 species of widow spiders. These are 3 species of black widow, a brown widow, and a red widow. Most of these inhabit the South and Southwest.

Widow species produce a powerful neurotoxin in their fangs that’s considered medically important and may be dangerous. Although widow bites aren’t usually painful, they may prompt swelling, muscle cramps, fever, nausea, sweating, disorientation, and other symptoms. A healthy person will recover after 24 to 48 hours of suffering. The bite is rarely fatal, except in cases involving infants and the infirm.‌

The continental U.S. is home to 6 species of brown spiders belonging to the family Sicariidae, including the Brown recluse spider. These spiders are also sometimes called “violin” or “fiddleback” spiders because of the violin-shaped pattern on their cephalothorax. Female recluses tend to spin thin silk retreats in undisturbed sites where they spend the daylight hours.

Indoors, recluses usually build their nests among seldom-used clothing and shoes, the lower folds of curtains, draperies, and the skirting around furnitures. They’re frequently encountered in storage containers, attics, basements, and garages. As their name implies, they will attempt to avoid contact whenever possible.

You can keep potentially dangerous spiders out of your home or building by:

Insects have three main body regions, but spiders only have two: the cephalothorax (head fused with thorax) and abdomen (sac-like and unsegmented). Insects only have six legs, but all spiders famously have eight. Spiders also all possess a pair of jaws, a pair of feeler-like pedipalps, and either 6 or 8 eyes.

All spiders are predators and produce venom, which they subdue their prey and defend themselves. We broke the two most common dangerous varieties of spider in the US into two broad categories: widows and recluses.

If we discover a large spider population or particularly conducive conditions for spiders on your property, then we may recommend HomeGuard program for comprehensive protection.

If you think you have a spider problem, don’t hesitate to contact Plunkett's right away. We have the tools, training, and expertise to drive out even the most reclusive of eight-legged pests!