BlogHow to Get Rid of Boxelder Bugs: 6 Tips 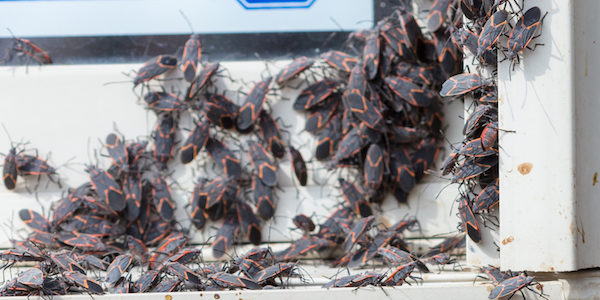 Just when you thought boxelder bugs were a thing of the spring, they disappointingly remerge in abundance in the fall. Sure, these pesky red and black beetle-like bugs aren’t dangerous or destructive, but they can be extremely annoying. A boxelder bug infestation in your house can seem overwhelming but Plunkett’s can help you get rid of boxelder bugs in fall and all year long. 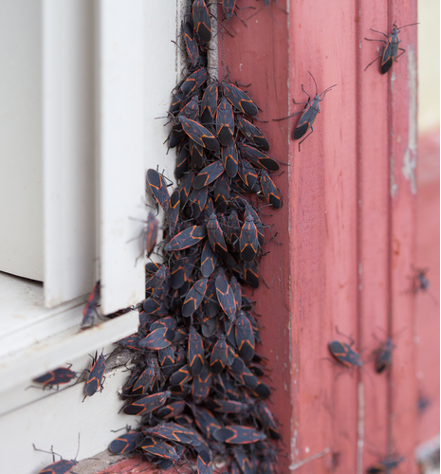 To minimize your boxelder problem, you need to keep them from congregating. Here are six easy ways to repel boxelder bugs from your home:

How to Get Rid of Box Elder Bugs

Getting rid of boxelder bugs doesn’t have to be overly complicated. Follow these 6 tips to keep these pesky red and black flying bugs away from your house:

To make your own boxelder bug spray, mix a tablespoon of dish soap into a spray bottle of water. As you find large groups of boxelder beetles clustered together, spray them with the dish soap and water mixture. You’ll kill boxelder bugs by saturating them fully with the water and dish soap mixture.

Soapy water repels boxelder bugs. Even if they don’t die, they won’t gather in that spot any longer. Spray the congregation of bugs until they disperse. Then, carefully scoop up and dispose of any bugs you’ve killed. Be careful not to crush them—when crushed, boxelders release an unpleasant scent.

Boxelder bugs like to congregate on heat-reflective surfaces where they can soak up warmth. Once they’ve gathered on the exterior of a building, they can often find their way inside. To keep these bugs from hanging out on your home or business, spray and scrub down their perches with soapy water or scented cleaning solution. 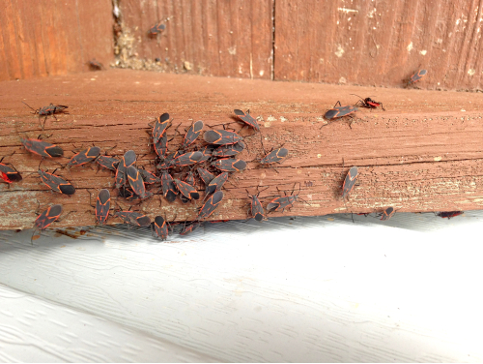 Using a cleaning solution will help repel boxelders and prevent them from returning. When you crush them, the foul-smelling liquid attracts other bugs. Scrubbing the problem area washes away these enticing pheromones along with that unpleasant boxelder bug smell.

3. Vacuum Up the Box Elder Bugs

Vacuuming up boxelder bugs as soon as you notice them will help keep them away. After you’ve sucked up the bugs, throw out the vacuum cleaner bag right away… otherwise they may just crawl out! Clean up the areas where you vacuumed with soapy water immediately after removing the boxelders. 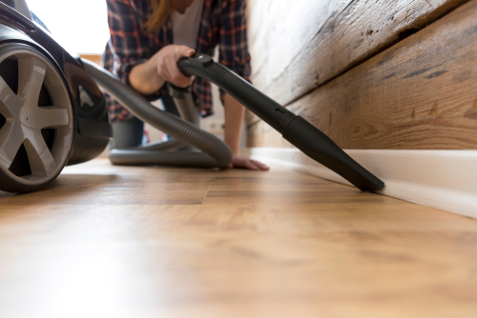 4. Seal Up Doors and Windows

As boxelder bugs bunch up together, they push each other into gaps and cracks around their perches. Once they’re inside these gaps, they follow heat until they’re inside the building. To keep boxelder bugs out, seal gaps around your windows and door frames with caulk. Do the same for any cracks or openings you see along siding or the foundation of your home. 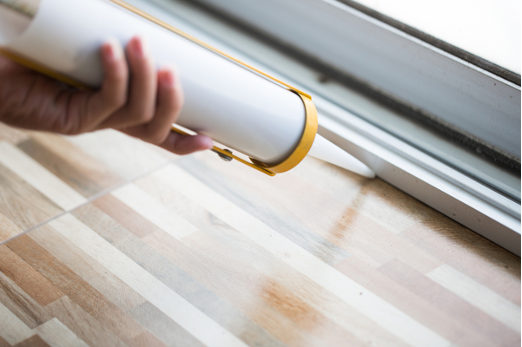 Because boxelder bugs are attracted to heat, they frequently end up in electrical outlets, switch boxes, heating ducts, or return air vents. Their flat bodies allow them to squeeze under plates that are loose or even slightly out of place. 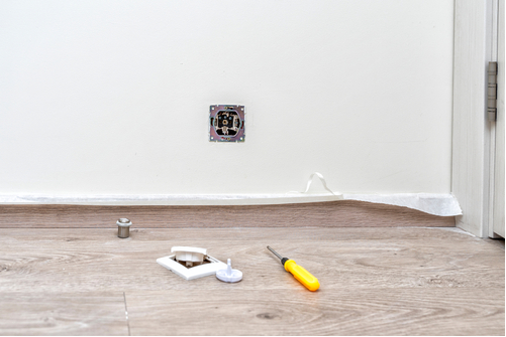 Seed-producing boxelder trees are what attracts boxelder bugs. If you have a tree on your property that produces those little “helicopter” seed pods, then it’s likely attracting boxelder bugs. Removing the tree will substantially reduce the number of boxelders around your home. 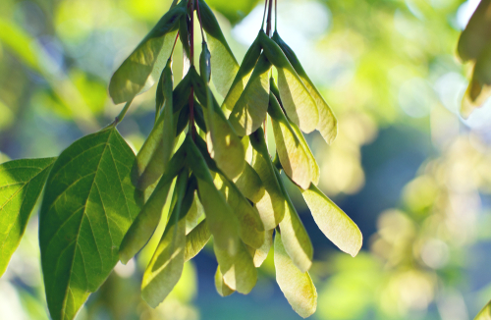 If you can’t or don’t want to remove the tree, consider trimming it regularly instead. Mow or rake up seed pods as they fall as much as possible. The less comfortable boxelders feel in your yard, the less they’ll want to stick around. 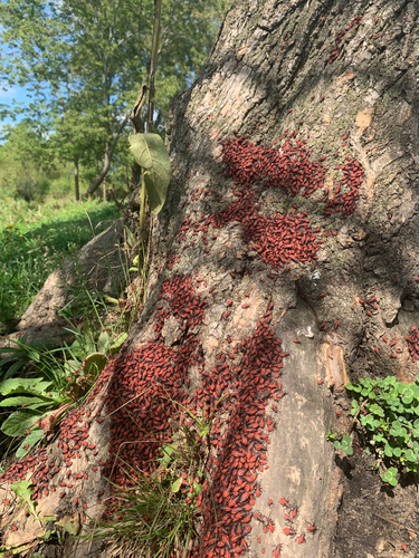 If You Can’t Box Out the Box Elders, Get in Touch with Plunkett’s!

If you’ve tried the tips above and you’re still wondering how to get rid of boxelder bugs outside or inside, the experts at Plunkett’s can help! We offer bug removal from houses and businesses. Get in touch with Plunkett’s today to get and keep boxelder bugs out. 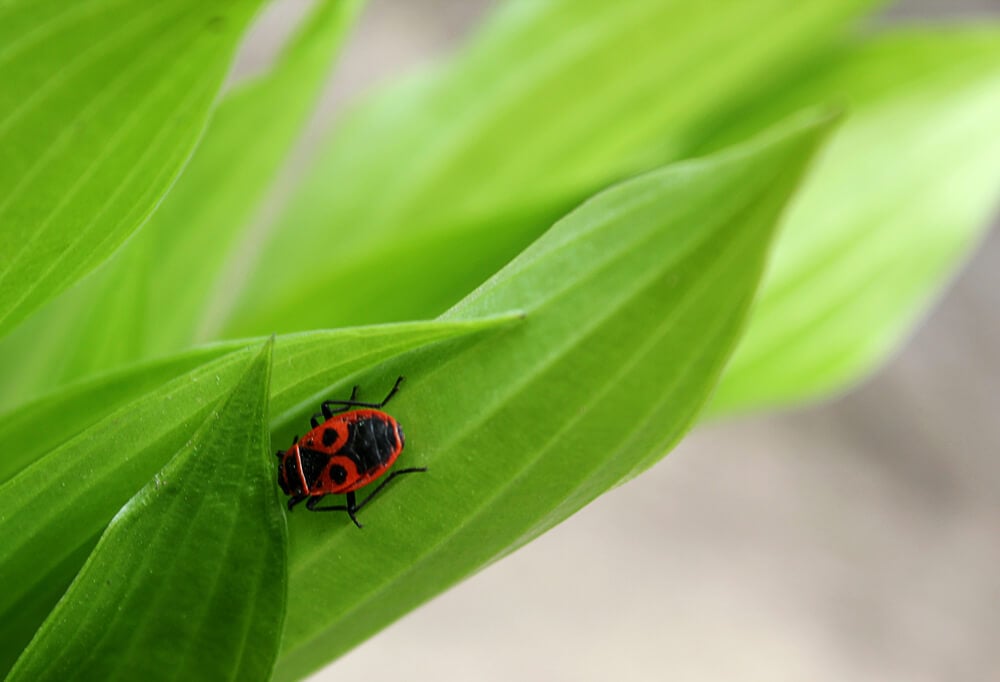 Your Guide to Boxelder Bugs: Where Do They Come From & What Do They Want?
Next 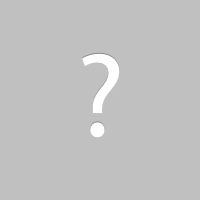