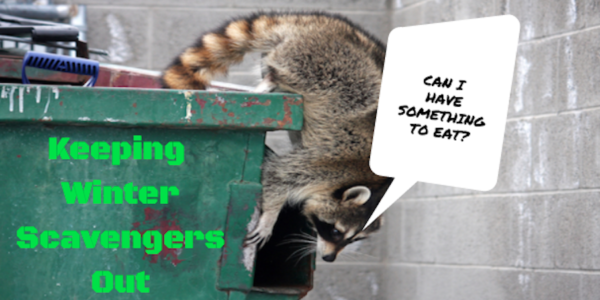 Raccoons are cute, but they’re also pretty creepy, aren’t they? Have you seen those hands? Too human-like, right? If raccoons are known for one thing, that’s food burglary. Those masks aren’t for nothing. In winter, a lot of the raccoon’s usual food sources aren’t available, so they’re more desperate to get at your trash than ever. Raccoons eating out of your trash can be gross, scary, unsanitary, and even potentially dangerous. Mostly gross. Come on guys, that’s garbage. Show some self-respect. Here are a couple ways you can prevent raccoons (and other opportunistic outlaws) from raiding your trash this winter.

Keep Your Garbage Inside

When it isn’t garbage day, consider keeping all your garbage containers somewhere secure, such as your basement or shed. This might not deter the cleverest of rodential robbers, but it will make their heist a little more complicated. If you can, try to keep your trash in a place that’s well-lit and sees plenty of foot traffic. Your regular activities can easily scare off most would-be can raiders. When it’s garbage day, it’s a good idea to keep your cans out for only as long as necessary for the garbage people to pick them up. Even after they’re emptied, make sure you check the inside of the cans before bringing them back in. You don’t want to have a Trojan-trash-can situation on your hands!

If you use something to securely fasten your cans shut, raccoons won’t be able to easily open them to get at the goods within. Bungie cords work particularly well; they’re strong and humans can easily remove them, while pests can’t. Tie one around the handles of your garbage can’s lid and it’ll be really hard for pests to pry it open. You could also use string, fishing wire, a garden hose, or any other kind of fastener you can think of. Remember, though, you still have to use the can! Make sure whatever you use can be safely and easily removed and replaced. Maybe duct tape isn’t the right answer, for once.

Rinse Garbage Items Before Putting Them in the Can

A quick rinse of things like cups, disposable containers, cartons, and even bones can remove food scent and wash away leftover residue that will appeal to pests. This will also prevent stinky garbage, which will make it easier to keep your cans somewhere you can see (and smell) them. We’re not saying you have to wash all your garbage, obviously, but look for food remains you could easily remove before tossing something. It’s surprising how much food we throw out when we aren’t paying attention, a fact which pests love. If you can reduce the appeal of your trash, you might find you have a lot less to worry about in the pest department.

Before you dump anything in your garbage cans, put it in a garbage bag. When bags are full, tie or seal them and then dispose of them in your can. Bags aren’t a surefire way to keep pests out, but they will make any food harder to smell. They can also provide a troublesome barrier between rascally rodents and a quick snack. Keeping your trash in bags will also prevent residue or grime from building up in the bottom of your cans even after the garbage people have emptied them out. This build-up attracts pests just like food does, so preventing it is yet another good way to make your trash less appealing.

Periodically Wash Out Your Trash Cans

Even if you seal all your garbage in bags, residue can accumulate in cans over time. Sometimes bags leak, and garbage smell gets left behind even after the trash itself is gone. If you wash out your cans thoroughly every couple of months, you can make sure nothing is getting left behind for pests. When scrubbing out your trash cans, it’s an especially good idea to use ammonia or a related cleaning agent. Not only will this be more effective than simple soap, the smell and taste of ammonia is extremely unattractive to raccoons. If you’re having a lot of pest trouble, it might even be a good idea to spray your cans down with ammonia between washes.

In addition to ammonia, there are several commercial and homemade raccoon repellents you could sprinkle around the areas where you keep your trash. Hot or cayenne pepper flakes, for instance, will taste and smell gross to raccoons but won’t actually harm them. Whatever you use, make sure it won’t harm you. Bleach and ammonia will keep raccoons away, but their fumes can also be harmful to inhale. Be careful of possible carcinogens in products like moth balls, too. We can appreciate a “scorched earth” approach to pest control, but trust us--sustainable and safe really is the better approach. It’s more effective in the long run, too! There’s a reason we call pests opportunists--above all, they’re looking for an easy meal. If you make sure they can’t get it from you, you’ll have done a lot to keep them away. And don’t worry too much about the raccoons--those lovable louts always find a way to get through the winter. Let them steal from someone else.   If you want some more winter-proofing tips, check out some of our other blogs on the subject! If you’re concerned you might already have an infestation, schedule an appointment with a professional today.
Categories:
outdoor pest controlpest controlpest preventionpestsraccoonsscavengerstrashwinter
Previous 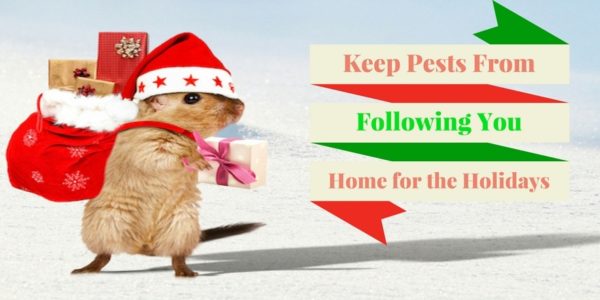 Resolutions for a Pest-free New Year